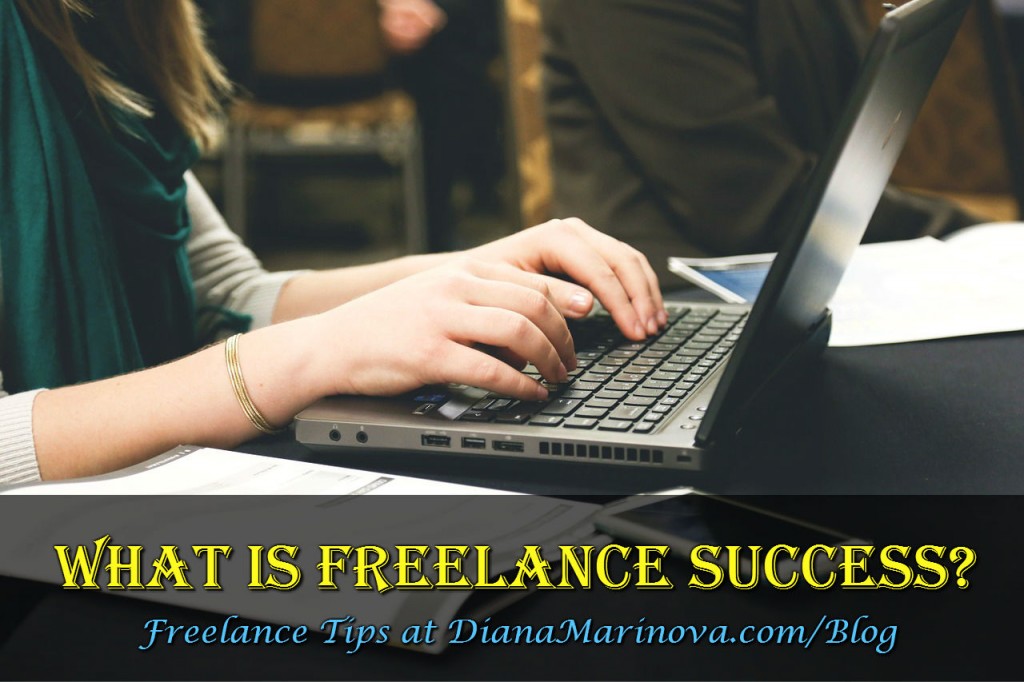 Everyone who has ever considered the idea of going freelance has asked themselves what freelance success is. Those who have made the decision to become freelancers ask the question more often, especially when they enter the 2nd stage of the freelance cycle and start doubting everything they do. Some answer it and move forward, others quit. Even successful freelancers ask this question from time to time – usually when they reach a point in their life when changes are coming – starting a family, growing their family, wanting more time, or something else.

My hope is that today’s post will help you understand how relative the term ‘freelance success’ is; how it is all that you want it to be.

In my life, I have met five types of successful freelancers. Let’s see how their definitions and lives defer.

Usually they are located in low socio economic countries and are pretty happy with the “ordinary life” they have. They would have led the same type of life even if they were not freelancers. They just wouldn’t have been paid as well if they were employees in the said country.

These freelancers were born and/or live in countries where the pay rate of $10 per hour is considered a lot of money. They work very hard and make about $15,000 to $20,000 a year which is plenty for them to maintain a high standard of life in their countries. They are satisfied with that and see freelancing just as a means to making a good living.

The hard and smart workers

These are the freelancers who work every single day, bill as many hours as possible and find new ways to maximize their efficiency.

They have long working hours, just like employees do. But because they work smart, not only hard, they sell their time and services at a significantly higher rate than the majority of freelancers. They make more than $100,000 per year, no matter the medium they use for finding their freelance clients. In the same time, they enjoy a life with far less stress and responsibilities which often go hand in hand with high-paying jobs in the corporate world.

These are the freelancers who work smart but don’t do it very hard. As a result, they work part time as freelancers and make, let’s say $50,000 per year. Freelancing their skills is the sole source of income for a while but their goal is to build their own businesses (not freelance related) and more importantly, passive income streams. They try to diversify their income and eventually, move away from freelancing and working altogether.

They find ways to maximize their efficiency and make a decent living while not working full-time (a.k.a. forty hours per week). But because they don’t do it that hard, they have plenty of free time on their hands to do whatever non-client-work related things they please.

These freelancers have figured it all out. Their annual income is six figures although they don’t work many hours per week. Because they work ten or less hours every week, they still have all the time they want for hobbies, family, friends, traveling, and anything they want to do. Oh, I wish one day I am one of this group 😀

These are the freelancers who make let’s say $25,000 per year, barely working and spending most of their time traveling the world, or working on charities and donating their time. They make money to cover their basic needs and everything else is white noise when it comes to work and pay. They have other priorities – money is important only as far as the cost of the next airfare ticket or accommodation bill goes.

(If you are an adventurer, check out PictraMap – our latest product which is just going into beta testing. Join our community to see an animated travel map made with PictraMap AND to get invited to try the tool when it’s available!)

Everyone in any of the above five groups has achieved their own version of freelance success.

Some would argue that if you don’t make $100,000 per year, you have not really succeeded as a freelancer. That would be true only if everyone had defined “freelance success” with money as the end game.

Let me quote a fabulous comment I saw on Quora a while back:

Your hourly earnings are important. Your annual earnings are not. Someone making $50,000 a year at $500 an hour has more of their time (meaning their life) than someone making $100,000 at $50 an hour. This is the single most important concept in understanding who is rich and who is not. Someone is not living an enriched life because they have amassed wealth and material possessions. Someone is living an enriched life because they have the freedom to spend their time how they wish!

Here’s the link to the full answer, if you are curious.

Although the posed question was about personal finance, this portion resonated with me. It describes very well what the meaning of freelance success is for me – to have control of your time; of your life; to live your life on your own terms and not according to somebody else’s schedule.

For me working forty hours per week as a freelancer would be foolish because I would still be working hard for somebody else, my clients.

One of the beauties of freelancing is to be able to travel and still make time for my own projects – whether developing my own business ideas, products, passive income streams, or something else.

As an employee, I didn’t have the time and energy for that. Should I work as a freelancer forty hours a week, I wouldn’t be able to do it either.

Sure, I’d make a six-figure annual income but what good it would be for me if I didn’t have the time to enjoy it the way I’d like?

So, what is freelance success, really?

You decide. Don’t listen to people who define freelance success for you.

Someone might tell you to work smarter and not to spend all your time and energy on clients’ projects – to develop your own projects and passive income streams so that you never ever have to work again, for anyone.

Others will tell you to work the bare minimum and go see the world because it’s your only life and you should truly enjoy it. (Assuming you like traveling and emerging yourself in new cultures 😉

And yet others will tell you that you are a joke if you don’t make a six-figure annual income.

I will tell you to think really hard what it is that you want to do with your life.

Taking the liberty to define your freelance success is part of being a successful freelancer.

State of Mind for Freelance Success

How Being Proactive Matters for Freelance Success

Freelancer vs Employee – 3 Rules of Thumb for Freelance Success